“You want free speech? Let’s see you acknowledge a man whose words make your blood boil, who’s standing center stage and advocating at the top of his lungs that which you would spend a lifetime opposing at the top of yours.”

Today, I came across two Facebook updates by Andrew Loh (here and here) where he asked: 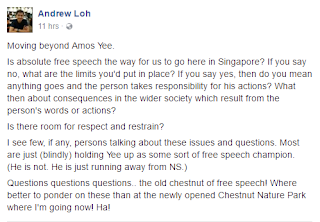 I don’t normally post elaborate responses to Facebook conversations but this time I felt compelled to because:

1. I find it surprising that having suffered at the hands of the Protection from Harassment Act (POHA), Andrew does not realise the irony of what he is trying to propose.

2. The arguments put forth by some against “absolute free speech” were getting ridiculous.

It’s like one of those promotions that says “FREE!*” Who the fuck believes that?

Ok, I guess I have offended some people with that irresponsible speech. But guess what? Alvin Phua rightly pointed out:

And then there are those who use the age-old fire-in-the-theatre argument to justify the boundaries for free speech:

To which, without going into a long-drawn philosophical debate, Christine Sng Mechtler summed up the difference best with these three choice words:

Andrew and several others mentioned somewhere (can’t remember where I saw the comments as it became difficult to track the conversations) that if we impose limits to free speech, it will have to apply fairly to everyone, including that obnoxious IB, Jason Chua. Problem is, if the law of the day ruled that what Jason the cockroach says is well within the legal framework of “free speech”, do you just go lppl?

Once you advocate that a higher authority has the right to determine what is ok within the context of free speech, you basically cede your rights to any form of free speech.

What I believe is that free speech should be guided only by your own moral and ethical principles, and if your principles happen to be immoral/unethical, expect people to challenge them. Or walk away (hey, that’s a valid option too!).

What irks me is when people resort to straw man argument to state their case against free speech, as Jolene Tan rightly observed:

3 thoughts on “I believe in free speech*”