In the aftermath of GE2015, there have been numerous rationalisations/justifications on why Singaporeans voted for suicide. 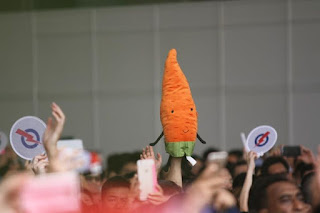 I’m not going to pretend to be an expert and offer a detailed analysis of voting patterns because I don’t want to be accused of trying to “chut pattern“.

Rather than put the blame for the opposition’s dismal showing at the polls on swing voters in the form of new citizens*, I am going to show you that all those reasons outlined above are just lame ass excuses for an act of cowardice.

(*New citizens are here for the pre-existing conditions, so to expect them to vote for change you would have to be either very optimistic or extremely foolish.)

Let’s take the example of “no credible opposition“. Without going into the specifics, let me ask you just one question: is the #PartyAgainstPeople credible? Don’t ask me for evidence to prove otherwise. Do your own research and draw your own conclusion. If you are oblivious to the writing on the wall, nothing I say will convince you.

The bottom line is:

You had the chance to vote for change, but you voted against it.

You had the chance to empower yourself, but you voted against it.

You had the chance to put your voice in parliament, but you voted against it.

You had the chance to vote for transparency and accountability, but you voted against it.

So tell me, what exactly did you vote for? More of the same?

Don’t tell me hazy stuff like “with you, for you, for Singapore”. 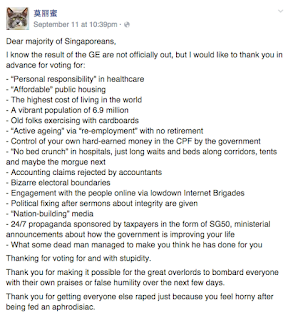 On the other hand…

You had the chance to vote against opening the floodgates to foreigners, but you didn’t.

You had the chance to vote against gerrymandering by the #PartyAgainstPeople, but you didn’t. 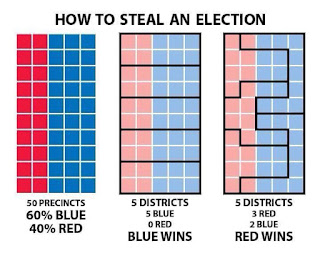 You had the chance to vote against pork barrel politics, but you didn’t.

You had the chance to vote against marginalisation of your fellow Singaporeans, but you didn’t. 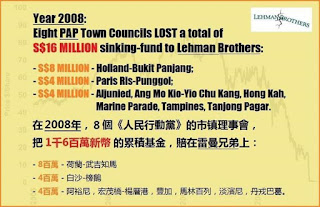 You had the chance to vote against cronyism and nepotism, but you didn’t. 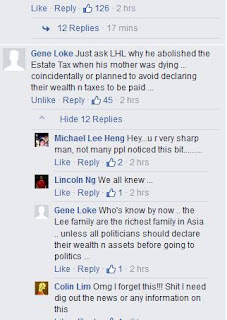 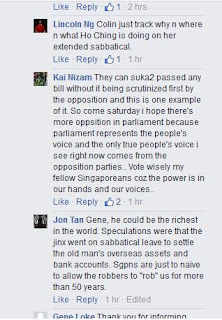 So tell me again, what the fuck did you vote for?

Your last line of defence is probably to say that one should not protest for the sake of protesting.

It is a testament to the amount of brainwashing Singaporeans have gone through that a protest vote is inherently perceived as negative and politically incorrect.

“But what is very important is to remind all my friends that you have a voice, and that you should use it any chance you have–to point out the wrongdoings, to check the abuses of power, to always bring attention to the marginalised and the oppressed.” ~ Alfian Sa’at

So just come clean and admit that you lack the guts to make real change. Nor do you have the compassion to do so.

“I guess Singaporeans get the government they deserve, so I don’t want to hear any more complaints.” ~ Kenneth Jeyaretnam, Reform Party

So the short answer to the question: No way. Because we have reached the point of no return. 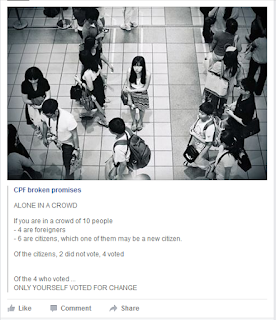 With that, I shall leave you with this:

Stories referenced in this post:
Fear of being fixed: The impact of the climate of fear on the 2015 Singapore General Election
That makeshift cubicle at the void deck
Liar, Liar, Bum On Fire
Massive breakdown – Govt’s claim of accountability put to the test
MND skirting around concerns about the Sengkang columbarium tender
AIM saga – MND’s failure to distinguish politics from policies
States Times Review apologise to PAP MP Lee Bee Wah
All in the FamiLee
New Citizen Voters decided this Election and Will Decide all future Elections