And it’s not just booth babes. Well, they’re not stationed at the booth alright, but… 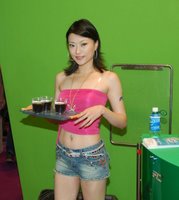 Coffee, tea or me?

VIA tried to wow the crowd with a concert-like performance. Naturally, the skimpy clothing helps.

Girls on rollerblades. Many of these “troops” paraded the show ground this year, including a bunch of “Supermen”. (The reason why I didn’t take their photograph is obvious.) 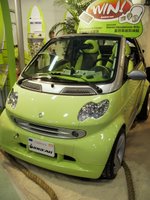 Like CeBIT, even cars made it into one of the halls. No, they’re not giving it away as a prize (despite the signage).