Whichever way you call it – Origami, Ultra Mobile PC or Lifestyle PC, it’s hard not to get sucked into too much of the hype generated from CeBIT. Like the Tablet PC and Pocket PC that came before it, Origami uses the pen as its main mode of input, although some prototypes are slates with buttons on either side. Unlike Tablet PCs, Origami devices will not use a Wacom-style digitizer under the LCD. Instead, they will use a Pocket PC-style resistive touch screen. Origami systems are also expected to come in a variety of form factors. Among them will be a convertible-style Tablet device with a hinge, codenamed “Kinesis”. 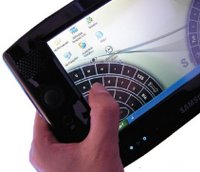 Much has been written about the possible specifications of Origami devices from various manufacturers, so I am not going to repeat what you may already know. What intrigues me is how the Origami Project, if successful, could potentially kill off the Tablet PC or Pocket PC.

Already, HP has predicted the demise of pen-based PDAs at its Magical Mobility Launch event in Hong Kong earlier this month. Hardly surprising, considering many Pocket PCs have evolved to become smart phones.

It might also be worthwhile to note that Origami is probably the result of the partial failures of Microsoft’s other two quixotic adventures: Tablet PC and Portable Media Center.

To be fair, the Tablet PC is not an abject disaster. But it didn’t gain the widespread acceptance that Microsoft envisioned when it first launched the product in 2002. Well, it certainly didn’t beat my expectations back then. Still, according to eWEEK, reports of Tablet PC’s death have been greatly exaggerated.

Portable Media Center, however, is another thing altogether. You’ll have to seriously question if Microsoft intended this to be a half-hearted transitional product caught in the frenzy of digital convergence.

The salient issue here is whether this latest marching order for obedient hardware manufacturers can survive the test of time. Origami, according to Microsoft, is intended as a work/entertainment hybrid.

Indeed, Nickolas Landry, mobile business manager with Infusion Development Corp., a Microsoft partner based in New York, said in his blog that “this device will be perfect for Outlook, notetaking, games (maybe not Age of Empires III or World of Warcraft, but ideal for more ‘casual entertainment’ games), but it will of course be ideal as a media device for pictures, music and movies, especially since it will have a hard drive, of course. Makes you wonder how relevant the Portable Media Center will be after this hits the market. Hopefully the visions will merge. Hello WinPod!!!”

The long-term plan for Origami appears to be aimed primarily at consumers, but with a price tag that’s expected to start at around US$500 and which could potentially range up to US$1,200, some sources are wondering whether Origami will be a Lifestyle PC, in the truest sense of the word.

This is why experts believe that Origami devices will initially find favour among business users in niche markets such as the medical field, where products such as PDAs and Tablet PCs have also found their calling.

Furthermore, according to Martin Reynolds, vice president at market research firm Gartner, it will likely be until 2008 before enough Origami devices and applications reach the market to build any sort of momentum for the platform among business users. Reynolds added that he could envision workers such as restaurant staffers or field service technicians adopting the smaller PCs.

One thought on “Origami: Death of the Tablet PC as we know it?”