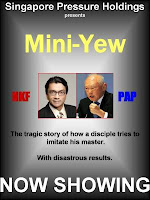 The parallel is uncanny.

Both organisation grew from humble beginnings to become highly successful machineries in their respective fields. NKF started off as a small charitable body to become Singapore’s most high profile charity organisation. PAP went from a united force with the communists to become the dominant party in the Singapore political landscape.

As they grew in prominence, both organisation became so intoxicated with their own successes that they refuse to pause to review their actions. NKF refuses to evaluate the cost effectiveness of its star-studded fund-raising TV shows. PAP refuses to review the ministerial salary even as the general population went through difficult times during the economic downturn. There is also no way to figure out if the ROI is justifiable. If every charity embarks on the same direction that NKF has taken, imagine the huge inefficiency of channelling precious donations to people who really need them.

Another similarity is that both organisations indulge in questionable practises. NKF was unwilling to reveal how it accumulates and utilises its S$189 million reserve. PAP refused to give details of Singapore’s reserves, when queried by the late president Ong Teng Cheong. There is thus little or no accountability on how reserves are being used.

Both organisations manipulated the public through the media. NKF exploited donors’ emotions by using sob stories on TV shows to solicit for donations. PAP capitalised on voters’ fear by threatening not to upgrade estates that voted in favour of the opposition and spreading FUDs about the opposition through the government-controlled mass media.

The fund-raising method of NKF also resembles PAP’s election strategy. Both sought to dominate the entire market through whatever means. By doing so, NKF deprives more deserving charities of necessary funds, while PAP rules out the possibility of alternative representation in parliament.

The development of these two organisations goes to show one thing – that checks and balances are required as an organisation grows bigger and more powerful. NKF’s recent documented difficulties ran counter to the popular perception that Singaporean institutions are well managed and typically reinforce the country’s reputation for a lack of corruption.

UPDATE: Download a copy of KPMG’s report on the NKF here.