It was reported that Singapore prime minister Lee Hsien Loong will donate his pay increment of S$600,000 a year for the next five years to charity after Singaporeans became outraged by the recent ministerial pay hike. So does that make Lee Hsien Loong a modern day Robin Hood? 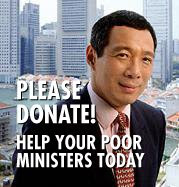 No. Unlike the real Robin Hood who robbed the rich to give to the poor, Lee Hsien Loong and his cronies in parliament are robbing everyone and returning only part of the loot to a selected group of poor people.

I’m not a mathematician, but someone calculated that this self-serving, unsustainable and illogical salary benchmarking exercise will cost Singaporean taxpayers $214 million, or about $50 per capita. This is absurd, because it means that Singaporean taxpayers are being forced to fund Lee Hsien Loong’s “charitable” donations.

Lee Hsien Loong says that his donation will give him the moral high ground to defend the move to raise the salaries of his fellow ministers. First, you don’t suddenly become moral by giving away money you obtained immorally. And least of all, you shouldn’t have done it after the fact – it’s akin to getting caught stealing and saying you’ll return the stolen goods.

Finally, did anyone question whether Lee Hsien Loong’s donations will be tax-deductible? Maybe that’s his creative way of avoiding taxes, if he’s taxed at all.

Compared to what Lee Hsien Loong and his father have done to boost their own fortunes, Halliburton looked like a mom-and-pop operation.

I am sure some useless minister with a sissy name from the PAP (yes, I’m referring to you, Vivian) will come out and urge Singaporeans to get on with their lives. But before these assholes spout nonsense again, may I remind them that to say “move on” without dealing with the consequences is the rudest form of political expediency.

Related stories:
Did you know – Ministers on pension scheme
Does Singapore have a clean government?
Mindboggling statistics
Go, Chok Tong