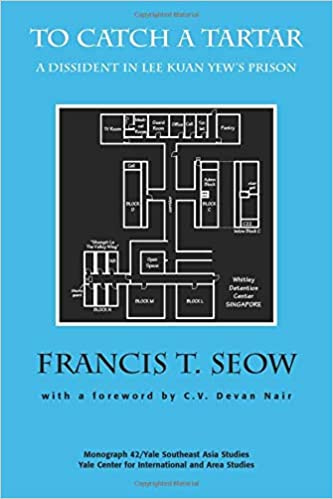 To Catch a Tartar: A Dissident in Lee Kuan Yew’s Prisonis an excellent study of the conceit and deceit of a man many Singaporeans thought they knew. The author, Francis Seow, is a former solicitor general and president of the Law Society in Singapore. This is his first-hand account of how he has suffered under the PAP government’s use of biased legislation and media manipulation to maintain political hegemony.

In Devan Nair’s words, Seow’s book is an eye-opener, “for those whose eyes still require to be opened”. The former president of Singapore, who incurred the “implacable wrath of a political genius gone awry” [referring to Lee Kuan Yew] for his public defence of Francis Seow, was labelled an alcoholic in a White Paper tabled before the Parliament.

Despite that, Nair traded blows with the government in several hard-hitting press statements and included a scathing attack on Lee in the foreword of this book: “Today, Lee no longer deals with his equals, but with his chosen appointees, who did not earn power the hard way, but had it conferred on them. They are highly qualified men, no doubt, but nobody expects them to possess the gumption to talk back to the increasingly self-righteous know-all that Lee has become. Further, the bread of those who conform is handsomely buttered. Keep your head down and you could enjoy one of the highest living standards in Asia. Raise it and you could lose a job, a home, and be harassed by the Internal Security Department or the Inland Revenue Department, or by both, as happened to Francis Seow.”

Such unsavoury opinion of Lee was shared by Seow, who wrote: “The passage of years, far from mellowing the prime minister, has made him more imperiously intolerant of the common man. His abrasive, intrusive style of governance has not changed, and is best exemplified by this statement, brimming with his customary, boastful insensibility, in the Straits Times of 20 April 1987: ‘I am often accused of interfering in the private lives of citizens. Yes, if I did not, had I not done that, we wouldn’t be here today. And I say without the slightest remorse, that we wouldn’t be here, we would not have made economic progress, if we had not intervened on very personal matters – who your neighbour is, how you live, the noise you make, how you spit, or what language you use. We decide what is right. Never mind what the people think.’”

Referring to Lee’s brutal treatment of Nair, Seow lamented “there are, regrettably, very few Singaporeans with that rare courage and intellectual, let alone political, honesty to call a spade a spade”.

On his part, Seow’s account of the horrendous process of interrogation he underwent at the Whitley Detention Centre includes disturbing dialogues like the following utterance by an Internal Security Department (ISD) officer: “Look, cut out all your court English. This is not a court of law. The rules of evidence do not apply here. We make the rules here. This is a kangaroo court. No one can help you, no one. All the human rights organisations can do is make a little noise, but how long can they keep it up? After a while, you will be forgotten.”

This devious way of thinking was also evident at the press conference following the arrest of the supposedly Marxist conspirators, which triggered off a chain of events leading to Seow’s subsequent detention. When asked by Archbishop Gregory Yong for proof of the involvement of Vincent Cheng, et al, in clandestine communist activities, Lee interjected with a sharp disclaimer, “I have never said that I was going to prove anything in a court of law”, which left his audience stunned. He continued: “It is not the practice nor will I allow subversives to get away by insisting that I [have] got to prove everything against them in a court of law or evidence that will stand up to the strict rules of evidence of a court of law.”

Contrast this to what Lee said during the Legislative Assembly Debate on 15 September 1955: “If it is not totalitarian to arrest a man and detain him, when you cannot charge him with any offence against any written law – if that is not what we always cried out against in Fascist states – then what is it?”

This, and several other quotes of Lee’s speeches in the 1950s and 1960s, were cleverly used by Seow throughout the book to show how Lee has become almost everything he used to be against since he came into power.

Seow also quoted to potent effect a comment by Jerome A. Cohen, a prominent legal representative of Asia Watch, who found deeply disturbing both the use of psychological torture and what he called a pervasive Singaporean, if not Asia view that “if you haven’t hit somebody, it isn’t torture”.

Seow’s description of his harrowing experience during detention seemed to have confirmed Cohen’s observation: “He [an ISD officer] swung his hand at me. I braced myself for the blow. But his fist stopped short just inches from my face. He looked like a thug. He behaved like a thug. He was a thug. …. Amidst deafening obscenities, he swaggered up to me and repeatedly blew thick clouds of cigarette smoke into my face. … Venting his frustration at my continued silence, he demanded that I take off my shirt leaving my upper body bare under the air-conditioner duct. No one stopped him. I reluctantly complied. It was cold. Very cold. Very very cold.”

Later in the book, Seow described the ISD’s tactics as such: “The word ‘torture’ normally evokes visions of medieval cruelty and violence, of racks, thumbscrews, and other exquisite instruments of pain and suffering. But the prime minister’s version of the Spanish Inquisition is more subtle and no less effective. A detainee can be made to admit anything by the simple expedience of prolonged deprivation of his sleep – a most effective weapon in the ISD armoury of persuasions, which is its standard procedure.”

The author also highlighted some of the dirty tricks used by the ISD: “For years, the conference room of the Barisan Sosialis headquarters was wiretapped without the leaders being aware of it. And the bugging of the residence of Barisan Sosialis’ chairman, [the late] Dr. Lee Siew Choh, was only discovered when workmen accidentally found the bugging device above the ceiling of the dining room whilst making repairs in his home.”

Seow further opined that the so-called Marxist conspirators were really just a group of young, intelligent, and idealistic graduates who could give the Worker’s Party credibility and status if they were to enrol as members. But, according to Seow, it was crucial, using officialdom’s favourite metaphor, to “nip them in the bud” before the flowers could bloom and contend.

To Catch A Tartar is thus a sober reminder that power, if left unchecked, can have dire consequences. Make sure you read Nair’s open letter to Lee at the back of the book for an intriguing insight into some historical events in Singapore.

Conclusion: A gripping tale of how Lee Kuan Yew systematically and ruthlessly roots out and destroys any form of dissent in Singapore. Viewed in that perspective, the plight of Ryan Goh, the SIA pilot who was evicted from Singapore over the Alpa-S incident, is hardly surprising.