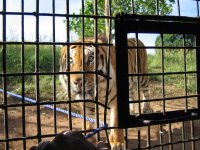 Seems to me that since the bird flu episode, chickens have been on the short end of the stick. Over the weekend, as part of a company excursion, I visited the Zoobic Safari in Subic Bay Freeport Zone and was “treated” to a tiger-feeding session using — you guessed it! — a live chicken.

Essentially, this involved riding in a Safari jeepney driven by a professional Aeta, with another (I hope) trained professional dangling the chicken from a tiny opening at the side of the caged 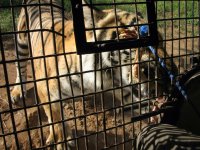 vehicle. The tigers, which ran freely in the open space, were teased repeatedly with the offer of the terror-stricken chicken until one eventually tore the prey off the attached rope.

For a moment, I was worried that this place might be raided by SPCA someday.

On another note, I remembered reading an “improbable research” about why everything tastes like chicken. It’s good to know we taste like pork, though. Suppose, instead of the live chicken, it’s us on the wrong end of the rope, I wonder if the tigers would agree…

One thought on “Run, chicken, run!”