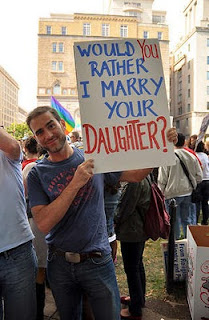 Here in Hong Kong, there seems to be some kind of protest every other week. Some 30 taxis, for instance, will stage a slow-drive protest in Kwun Tong over claims of faulty Sinopec LPG fuel. On New Year’s Day, thousands of pro-democracy protesters marched to the Central Liaison Office, but the supposedly peaceful demonstration turned ugly when violent scuffles broke out in the end. Two days later, dozens of demonstrators marched from Tai Kok Tsui to Mong Kok to protest against the funding for the HK$67 billion Guangzhou-Shenzhen-Hong Kong Express Rail Link.

Such protests are rare in Singapore, although protesters from both cities can take the cue from the gay man in the picture on the right to get their message across effectively.