I know this is probably too early for Christmas (after all, it’s still only Easter), but here’s a great gift idea for all the geeks out there.

Called Pocket 20Q, it’s a globe-like handheld electronic game that, presumably, can read your mind by asking you 20 questions (or less). The artificial intelligence behind the game is a neural-network, similar to a human brain. A brain, or neural-network, is built from neurons connected by synaptic connections. A human brain has about 100,000,000,000,000 synaptic connections. The 20q.net online version currently has about 10,000,000, and the pocket version has about 250,000.

For approximately fifteen bucks, the Pocket 20Q is a lot of fun. Other than English, the gadget is available in Chinese, French, German, Italian, Japanese and Spanish. It requires two AAA batteries to run (not sold separately, for once).

You can try out the online version of the game before you buy one.

Here’s an example of how the AI guessed the right answer within 20 questions. I was thinking of an iPod. 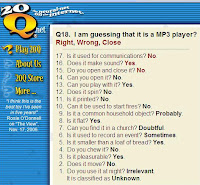