On October 17, George Bush signed into law the Military Commissions Act, which allows CIA investigators to use tough, physical interrogation methods against terrorists suspects [emphasis mine]. Although Bush denies the Act would sanction torture, it is beyond the shadow of a doubt that he is trying to redefine torture in his favour (just like how he tried to skew “victory” and “weapons of mass destruction” his way).

The question here is not whether Bush and gang (Dick Cheney, Donald Rumsfeld and Condoleezza Rice) are unable to face the truth. All evidences do not point to denial of truth or lack of realism. Instead, they point to deliberate lying, spinning and misleading the public. It’s time for Bush to call a spade a spade.

Chillingly, a recent poll conducted for the BBC revealed that nearly one-third of the respondents (about 27,000 people from 25 countries) consider the use of torture acceptable under certain circumstances. Another poll published last November by the Pew Research Centre found that nearly half of all Americans think torturing terrorist suspects could, at times, be justified. I’m sure terrorists feel the same way about their captives. 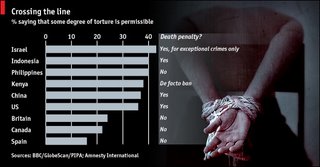 Terrorist or not, torture is immoral, ineffective (a desperate prisoner may say anything to bring his pain to an end), and makes a mockery of 2,000 years of modern civilization. So say “No!” to torture.

Frontline has a program that examines the torture question. You can watch it by following this link.