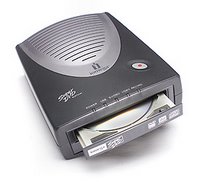 Due to its bulky size and hefty weight, the Iomega Super DVD QuikTouch Video Burner isn’t the most portable of external DVD writers. However, its robust design ensures that the drive is capable of taking a few knocks, unlike some of the ultra-slim top-loading DVD writers available in the market.

But what impresses me most about the Super DVD QuikTouch is its versatility. It can read and write to a multitude of formats, including DVD+RW, DVD-RW, DVD-RAM (non-caddy disks) and CD-RW. Although the Super DVD QuikTouch supports DVD-RAM, the speed when writing to DVD-RAM media is noticeably slower than with DVD+RW or DVD-RW. Unless you have concerns about the possibility of obsolescence of any particular DVD format, you’ll essentially be paying for the privilege of compatibility. On the other hand, if you have an existing investment in different DVD media, this drive might just help to protect your investment.

The 8x model I tested here is an update to the original Super DVD Writer, which was honoured with the “Best of CeBIT America” award for personal technology in June 2003. Thanks to its USB 2.0 connection, overall writing speeds are decent. I managed to burn 4.32 GB of data from an Iomega REV drive to a DVD+R disk in 16 minutes flat, using Iomega’s own HotBurn Pro software. Nothing spectacular, but I’m not in a hurry anyway.

Apart from burning data, the Super DVD QuikTouch can serve as a video-capture device with its composite (RCA) stereo audio and video ports as well as an S-Video input. Unfortunately, you can’t burn DVDs directly from an external video source because the encoding is done through a PC intermediary. A shame really, as this slows down the transfer process. But for casual use, the Super DVD QuikTouch is probably good enough.