The Road Home is a poetic love story that poignantly shows us the past and the present through the eyes of a son just coming to understand love acutely desired in youth and fiercely remembered in old age.

Director Zhang Yimou’s recent effort may have smacked of crass commercialism, but The Road Home is not one of them. Adapted from a novel titled Remembrance by Pao Shi, The Road Home shines with the kind of honesty that’s rare in today’s ultra-manipulative cinema.

The film opens with an educated son’s return to the rural village where he grew up upon the death of his schoolteacher father. His grief stricken mother had requested that her husband’s casket be carried by the villagers from the morgue to his resting place, as per the old tradition, so that he will know his way home. This request, however, poses a problem to the mayor, as all the able bodied men have since moved into the city, and the remaining townspeople are simply too old to make the arduous journey.

Undeterred, the mourning widow insists with characteristic single-mindedness the task of hand-carrying the casket. From here, the film revisits the couple’s unconventional courtship in a lengthy flashback with very little dialogue, where images speak and non-obtrusive narration by the son fills in the story. 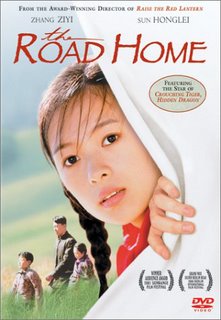 In contrast to the present day black and white scenes that accentuate the stark winter landscape and the despair of the mourning widow, the flashback is shot entirely in vibrant colours. Zhang Ziyi (of Crouching Tiger, Hidden Dragon fame) plays Zhao Di, the widow in her younger years. A non-educated country girl who lives alone with her visually impaired mother, Di is smitten by a handsome young man named Luo Changyu (played by Zheng Hao), who arrives as the new schoolteacher in the village.

Despite her mother’s warning that her budding love is doomed because of his higher social class, Di goes out of her way to cross Changyu’s path, even to the extent of deliberately fetching water from the old well by the school rather than from the brand new well, which is a much closer walk.

In a scene that demonstrates the film’s gentle humour, Changyu endeavours to fetch water from the old well when he notices Di’s presence there. Having already filled her pails, Di quickly empties them again in an effort to extend her stay and make their “chanced” encounter possible. Their finagling becomes futile when a passing villager insists on fetching the water on behalf of Changyu, whose objections border comically on physical confrontation.

Nonetheless, the emotions felt by Di and Changyu continue to blossom, interrupted by a dramatic separation when Changyu is recalled back to the city, and then again after he defies city officials and sneaks back to see Di.

By drawing upon the memory of their unconventional courtship, Di finally convinces his son to enact the old custom designed to keep his deceased father from forgetting the road home.

The film culminates in a moving scene where the son honours his parents by teaching a class of students in his father’s old school, before a new one is built in its place.

If you are accustomed to big-budget Hollywood production, you will be disappointed with the extras included on the DVD. There is only a section for Production Notes, which consists of behind-the-screen footages and interviews with the cast and director.

Fortunately, the delicately simple and emotionally satisfying story as well as the brilliant cinematography more than compensate for the lack of bonus materials. Deserving mention is Zhang Ziyi who, at 19 during filming, delivers a performance of surprising maturity. Her intensely concentrated portrayal of Zhao Di conveys a current of stubborn, obsessive passion. Based on this debut, one can almost understand why she went on to international acclaim later in Crouching Tiger, Hidden Dragon.

For those who enjoy movies with universal themes – in this instance, a child’s responsibility to his parents, the veneration society feels for education and educators, and the idea of pure, perfect love, The Road Home is well worth the two hours or so of your time. It doesn’t have a star-studded cast, no CGI, no gun-toting heroes in slow mo, and no foul language. Darn, there’s not even hugging or kissing between the two lovers. So what does that leave us? A movie like they used to make them.