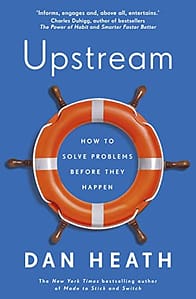 In this book, Dan Heath outlines why the old proverb, “prevention is better than cure” is indeed true. But one of the biggest challenges with solving problems upstream is that it is exceedingly hard to prove causation.

Furthermore, we often sabotage upstream efforts by subjecting them to tests we do not impose on downstream interventions. For example, no one is going to ask whether someone who needs heart bypass surgery “deserves” the surgery or whether the surgery is going to save the healthcare system money in the long run. On the other hand, when it comes to an initiative to prevent children from going hungry, suddenly the work has to pay for itself.

Sometimes the failure to deal with problems upstream is due to what the author calls “tunneling”, which is being so overwhelmed that you can’t deal with a problem unless it finally gets out of control. Tunneling, according to the author, “is not only self-perpetuating, it can even be emotionally rewarding. There is a kind of glory that comes from stopping a big screw-up at the last second.”

There are plenty of examples and anecdotes that are quite insightful. For example:

“The most successful preventive habit we have developed as a species is for the preservation of our… [lungs, brains, hearts] teeth.”

Let that sink in for a moment.

The author argues that this kind of mindset is the reason for the ongoing international failure to slow down climate change meaningfully.

“Could we someday learn to pamper and preserve the planet half as much as we do our teeth?”

However, good intentions may inadvertently cause harm if we are blindsided by the problem. Read, for instance, the chapter on the upstream intervention to prevent the extinction of native species on Macquarie Island.

The author has obviously done a lot of research on this topic. The “Notes” section is as long as one of the chapters.