Women might be able to fake orgasms, but men can fake entire relationships.
~ Sharon Stone

I saw a woman wearing a sweatshirt with “Guess” on it. I said, “Thyroid problem?”
~ Arnold Schwarzenegger

My mother never saw the irony in calling me a son of a bitch.
~ Jack Nicholson 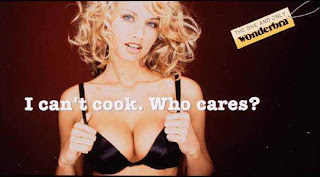 In the last couple of weeks I have seen the ads for the Wonder Bra. Is that really a problem in this country – men not paying enough attention to women’s breasts?
~ Hugh Grant

There’s a new medical crisis. Doctors are reporting that many men are having allergic reactions to latex condoms. They say they cause severe swelling. So what’s the problem?
~ Dustin Hoffman

See, the problem is that God gives men a brain and a penis, and only enough blood to run one at a time.
~ Robin Williams

It’s not easy being green.
~ Immortal words of the great American philosopher Kermit the Frog