We all know that the Chinese can produce cheap knock-offs, but guess what? They can also come up with some pretty innovative stuff. Take the spray-on liquid condom, for instance. 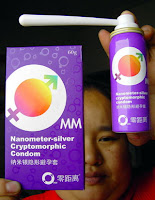 Dubbed the Nanometer-silver Cryptomorphic Condom, it’s designed for female rather than male usage. The condom-in-a-can is essentially an antiseptic foam spray that the manufacturer claims forms a physical membrane inside the vagina, protecting it from infection, acting as a barrier to pregnancy and providing a lubricating effect.

But wait. Isn’t there already something similar called spermicide?

Apparently, the condom’s antibacterial properties arise from the nano-particles of silver incorporated into the spray, or so it claims.

The problem is, the Korea Consumer Protection Board has lambasted local washing machine vendors for claiming their products, which are coated internally with a nano-silver spray like the condom in question, kill 99.9% of germs in the wash. Instead, the board said that it is the hot washing water that’s doing the job, not the coating.

Well, if the product doesn’t have the industrial strength to live up to its claims, you can at least try to use it to preserve squashes for a couple of days in the fridge.