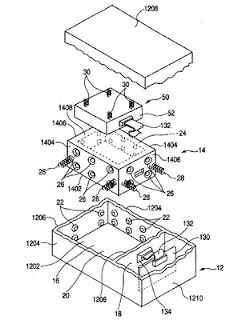 Ok, maybe not the type of “airbags” that you typically associate with, i.e. people who talk non-stop on their cellphones. Apparently, Sony believes that the cellphone has become so important in our lives that it should be protected againts accidents. The consumer electronics giant has filed a patent with the U.S. Patent and Trademark Office that took the airbag concept a step further. According to the patent application, Sony has developed a water-tight casing designed to protect a cellphone’s electronic innards in the event of an otherwise fatal drop. The casing would surround the internal electronics and then be placed within a second liquid-filled chamber, which would be perforated with holes (see illustration).

And this is how it works: If the cellphone experiences an impact, the inner bag would push against the liquid and squeeze it through the holes and out into the outer chamber. This, theoretically, would reduce the force of the impact.

It’s a nice idea, but wouldn’t the liquid move away from the point of impact?