It’s amazing how people will bend over backwards to kiss Oprah Winfrey’s behind and hang on her every word. Love for Oprah smacks of deification, except in this case, her worshippers got duped (again) along with their idol when Herman Rosenblat, author of Angel at the Fence: The True Story of a Love that Survived

, admitted that he fabricated the story of how he and his wife met at a Nazi concentration camp. 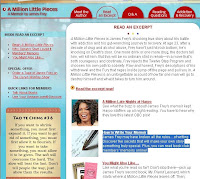 But Rosenblat’s “memoir” is hardly the first piece of crap Oprah has pushed on her adoring (read: gullible) public. The bogus autobiography, deemed by Oprah as “the single greatest love story” she’s ever featured on her show, is just one of several “memoirs” that have been promoted by Oprah and then later exposed as frauds. These include James Frey’s A Million Little Fabrications… oops, A Million Little Pieces

and Margaret Seltzer‘s Lies and Consequences… sorry, Love and Consequences. Oprah really should get out of the literary world and stick to her TV show dribble and self-promotion.

By the way, The Last Confession is based on a true story.