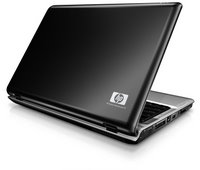 HP recently launched the HP Pavilion dv2000 series and Compaq Presario v3000 series of entertainment notebook PCs in the Philippines. During the launch event at Temple Bar and Restaurant, Greenbelt 2, Makati City, spokespersons for HP took pains to highlight the design aesthetics of the new laptops. For instance, the new models are the first to feature HP Imprint finish, a casing design created through an advanced molding technique that integrates a hard-coat surface via a film transfer process. This provides greater durability and scratch resistance than the traditional painted surfaces of other laptops, according to the company.

The Pavilion dv2000 series and Presario v3000 series are topped off with sleek, latchless LCD screens and backlit QuickPlay capacitive buttons that allow users to tap or swipe control buttons to launch applications, similar to the way a touchpad would work.

All told, they look nice on the outside, but not much was said about the innards of the machines and their performance relative to earlier series or other brands.

Okay, maybe I’m being picky, but why are the new laptops so darn heavy (2.41kg for the dv2000 series and 2.45kg for the v3000 series) if they are supposedly targeted at “young professionals who are always on the go”?

So is the computer personal again? I’d say not until we see something else from Apple.

Other posts on HP:
Hurray to Blu-ray
Power PAQed, but…
The Motorola of digital cameras