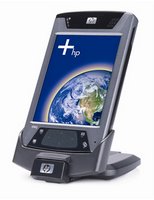 Many hardware reviewers have raved about HP’s iPAQ hx4700 ever since its launch, and the general consensus is that it is the most powerful and feature-rich PDA to hit the market so far.

Granted, the specifications of the iPAQ hx4700 are indeed impressive. The device runs on Intel’s 624MHz XScale PXA270 processor, Microsoft’s latest Windows Mobile 2003 SE operating system, and boasts a 4-inch VGA TFT colour display, integrated Wi-Fi and Bluetooth as well as dual memory slots (for CompactFlash and SDIO cards) on top of 128MB of ROM and 64MB of RAM.

But having laid my hands on a review unit for roughly two weeks, I wasn’t so sure that function necessarily triumphs form for a device of this nature. That is not to say I’m dissatisfied with the iPAQ hx4700’s performance. While I didn’t run any benchmark test on this device (because it’s quite meaningless to do so), I had few issues with its overall performance, save for the occasional freezes that necessitated a reset. (Well, it’s Windows OS after all.)

What really peeved me is the thought that in trying to cram so many features into the hx4700, HP might have overlooked the finer aspects of design. One perennial complaint I have is the absence of a Hold button. With due respect, I can never understand why HP chose to leave this option out. Even on a mobile phone, there’s a button to lock the keypad to prevent accidental operation of the device while it’s sitting in your pocket or bag.

Maybe I’m just fussy, but I also find the placement of the infrared port at the bottom of the unit rather odd. You don’t normally turn your device the other way around to perform beaming.

The new navigation touchpad, which incorporates NavPoint technology from Synaptics (if you recall, the same folks who provides the interface for Apple’s iPod), is a neat concept, though for those who are accustomed to using the stylus, there will be some getting used to.

Speaking of stylus, if you use the hx4700 to listen to music (with earphones of course, the built-in speakers are too weak for that purpose), you will realise that the close proximity of the earphone jack to the stylus holder gets in the way of using both at the same time.

Admittedly, these are little things. But you would have expected HP to sweat the small stuff as well.