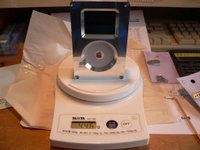 Trust the Japanese to come up with useless inventions like this. After his iPod was crushed in the sardines-packed commuter train, an enterprising guy who lives in the Kanto region in Japan decided to assemble a veritable vault milled from solid aluminium to protect his new iPod Photo from a similar fate. The unnamed modder christened his project “Armor plate for iPod Photo” and he reckons that the 5mm shell could stop a 0.22 bullet.

If you can’t read Japanese for nuts, you can check out Google’s attempted translation of the site, but with phrases like “When exactly there is iPod there, there is no one it is aegagropila, probably will be”, you might just want to look at the pretty pictures.

It’s hard to imagine how this accessory could catch on, but even if it doesn’t, the 446g case makes a sturdy paperweight.