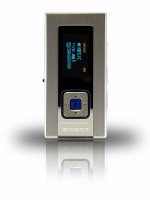 No bigger than a Zippo lighter, the Korean-made XCENT XT-100 epitomises the old adage that nice things come in small packages. Weighing just 45g with the built-in Li-Polymer rechargeable battery, the XT-100 features a minimalist design with aluminium housing and indigo blue navigation key. But what really catches the eye is the 4-line OLED display that transforms itself into a mirror once the 2-colour text on the screen goes off.

However, the shiny front does smudge easily and the OLED display is a disaster when it comes to broad daylight (possibly because of the mirror-like effect), which renders the display unreadable on many occasions.

On the plus side, the XT-100 allows playback of MP3, WMA and OGG files as well as recording of FM broadcast, voice and music in MP3 format (variable bit rates). I particularly like the resume function, which lets you set the player to playback at the position where it was stopped.

The option to change the tempo of music tracks will also give you the opportunity to relive the good old vinyl days. For those who have their own devious idea of what constitutes fun, they can use this function to turn Christina Aguilera into a man.

Random play is quite erratic though. Given that the XT-100 “only” has 512MB of on-board memory, the probability of ending up with a recently played track on random mode is unnecessarily high.

To make matters worse, the underpowered stethoscope-like stereo earphones had trouble lodging themselves firmly in the ears, and the constant adjustments needed to put them back in place can prove quite a nuisance.

For casual listening, the volume on the XT-100 is adequate. But if you really prefer it louder, the 3D sound (SRS/TruBass/WOW) can give you just that – at the expense of the music actually sounding good. The high notes have a tendency to sound a bit harsh, but on the average pair of ear buds, you probably won’t hear the difference.