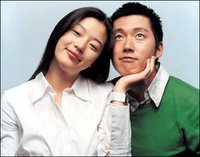 Windstruck, the pseudo-sequel to the romantic comedy My Sassy Girl, starts off brightly enough, even though the opening scene has the female lead character, Yeo Kyung-jin (played by the effervescent Jun Ji-hyun), on the verge of a headlong plunge to meet her maker (or should it be her lover?).

This scene sets the stage (and expectation) of what’s to come, but the director cleverly diffuses the situation with a series of hilarious encounters that led to Kyung-jin and Myung-woo (a newly hired physics teacher at an all-girls high school, played by Jang Hyuk) being linked together – and not by the handcuffs that Kyung-jin snapped onto their wrists during a particularly side-splitting pursuit of a drug trafficker.

Jun Ji-hyun, Korea’s undisputed top actress, excels in her role as a quirky, wayward policewoman who is hell-bent on catching criminals. Like her predecessor in My Sassy Girl, Kyung-jin dominates the screen and her male partner with her characteristic brand of mischief and innocence – the kind of personality I can personally relate to in real life.

In a surprising role-reversal, Kyung-jin visits Myung-woo’s classroom to bring him his lunch and proceeds to crack jokes about their relationship in front of the group of schoolgirls who applaud her public display of affection.

From here, the movie kind of degenerates into a tear-jerking melodrama of Titanic proportions. One scene even has the duo stretching their arms on a mountaintop with the wind blowing hard into their faces, a la Jack and Rose at the helm of the tragic, unsinkable ship.

However, towards the last 20 minutes or so, you’ll be so awestruck by the sheer absurdity of what’s happening that every utterance by the two lead characters will leave you cringing for less.

Watch out too for a miraculous flying machine called paper plane, which seems to have taken on a life of its own and eerily never stops gliding around, as if on autopilot. How much that will hit your credulity depends on your tolerance of the supernatural.

Eagle-eye viewers will also lament the unabashed product placements throughout the film. A Giordano T-shirt, for instance, was particularly prominent during the final encounter.

A shame, really, for a movie that began so promisingly.

Verdict: Windstruck will inevitably be compared against My Sassy Girl for its comic relief and heart-warming moments. Unfortunately, the scriptwriters turned a believable story into an almost farcical fairy tale.

In my opinion, the movie should have ended with Kyung-jin’s second attempt at suicide. Then again, the filmmakers may have taken into considerations the sensitivity of moviegoers and made a conscious decision not to stir any thoughts of imitation by easily influenced teenagers.

If you’re not dying to watch the movie, wait for the DVD release when you will have the option of skipping through the last bits.