Undoubtedly, the Vietnamese have a killer instinct. Otherwise, they wouldn’t have survived so many wars (the First Indochina War against Japanese, Chinese and mostly French colonialists, and the Second Indochina War – the American part of the Vietnam War, or simply “American War” to the Vietnamese) within such a short span of time (1945-1975).

True, the Chinese probably fought twice as many wars in an equivalent timeframe during its long history, but more often than not, they were at each other’s throat than at foreign enemies’. 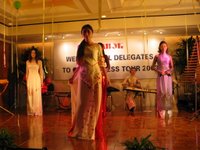 And it’s not just armed conflicts that the Vietnamese seemed to excel. During a recent press trip organised by Canon Singapore to Hanoi (capital of the Socialist Republic of Vietnam), I had the rare opportunity of witnessing typical Vietnamese killer instinct in full display.

Organised chaos
Nothing, apparently, seems to faze the Vietnamese, certainly not staring danger in its face. While in Hanoi, I realised that the locals have a knack of avoiding impending disasters in the frantic (and to law-abiding Singaporeans – lethal) traffic where motorbikes, bicycles, cyclos, cars, buses, tourist coaches and, believe it or not, pedestrians fight for space with little sense of order, let alone a highway code. The driving is also horrendous: In America, people drive on the right side of the road; in Europe, they drive on the left side; but in Vietnam, they drive on both sides. At night, with few street lamps and some vehicles without lights, it can seem positively murderous.

Yet like the meandering rivers that cut across the entire country, Vietnamese road users appear to navigate the chaotic traffic (rush hour or otherwise) with consummate ease. The only complaint about such efficiency is the constant horning by motorists, which reminds me of people suffering from Tourette’s syndrome. (A fellow journalist even went as far as to remark that he didn’t know a “Gulf of Honking” exists, alluding to the gulf to the east of the Red River Delta.) 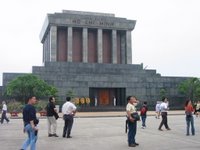 However, the liberal use of the horn is seldom associated with any ill intent – unlike in Singapore where it’s followed up by a middle-finger salute or “regards” to the other party’s parents, often with not even an excuse in tow. Here, rather, the horning serves as a subtle warning to watch out, move aside, or double up. And no offence is taken.

According to our tour guide, Long (as in “dragon”, in Chinese), despite the disorganised traffic conditions, accidents were few and far between, and it’s rare for a motorist to end up as a roadkill, or a road bully for that matter. True enough, we couldn’t prove him wrong during our four-day stay in Hanoi.

A nation of contradictions
Much of this, I suppose, boils down to the humility amongst the Vietnamese. This was amply demonstrated by an incident at Hotel Nikko (where the huge entourage of journalists was put up). When asked why the bar area in one of the restaurants was built on lower ground, the manager told me matter-of-factly that it’s because the bartender should be looking up to the customers rather than the other way round. Maybe it is time we Singaporeans get our priorities right, what with the hoo-ha over bar-top dancing.

Perhaps harder to measure is the effect of the war on the Vietnamese psyche. While many Vietnamese would be proud of their victory over one of the biggest military bullies in the world, they remain very much down-to-earth regarding the country’s achievement (or should it be under-achievement?). 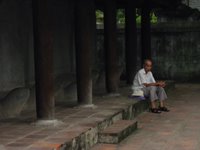 Except in the sense that a starving person is poor wherever he or she happens to live, poverty is relative. But if the salary of a typical factory worker is anything to go by, the Vietnamese are indeed poor. Yet even in such adverse economic conditions, the Vietnamese must be praised for their entrepreneurial spirit (or survival instinct?). On the streets of Hanoi, you can often see people peddling a wide range of foodstuff and products. Motorcyclists will even offer to chauffeur people around for a small fee whenever their passenger seat is available. Salesmanship is impressive, as teenage peddlers persisted with suggestive selling after the first deal (e.g. shoe polishing) is completed. Again, we have a lot to learn.

Obviously, the common view of Vietnam as one of the last bastions of Communism is obsolete. In fact, Vietnam seemed to have gone from one extreme to the other. Before, virtually all productive activities were paralysed by bureaucracy. Now, almost everything goes. The irony, according to former British MP, Chris Mullin, is that “a country that has suffered so much at the hands of rapacious foreigners is now on the point of surrender to a culture at least as foreign and at least as destructive as that which it paid such a high price to defeat”.

The arrival of the free market also means that city planners now have the resources to succeed where the B-52 bombers failed in eight years of US bombing: the Vietnamese government has been in a disturbing haste to sell off prime, historical sites to overseas developers (no prize for guessing where they are coming from). Fortunately, most of the buildings in Hanoi remain remarkably intact, devoid of obvious signs of the bombing campaigns or urban development. Let me reiterate: we have a lot to learn. 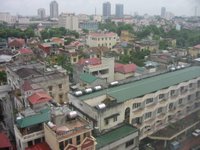 If you happen to drop by Hanoi anytime soon, bear in mind that much of its charm lies not so much in the official “sights” (some of which can be decidedly uninspiring) but in the unofficial and informal: the traffic, the bustle of pedestrians, provincial architecture with beer can-like water tanks on rooftops, tube houses, tamarind-lined boulevards, the delicious pho (pronounced “fir), and of course, the people.

One thought on “Killing me softly with his song”