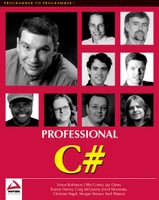 If books could kill, this probably will. Not so much because of its size (in excess of 1,300 pages) and weight (two kilogrammes), but rather, if you follow what was written to a T, you’ll be in for a nasty surprise. At the time of writing, there were already five pages of errata documented on the publisher’s Website (www.wrox.com).

For a book that claims to be written by programmers for programmers, Professional C# appears to suffer from having too many different writing styles and abilities, making the book seem unusually disjointed. A typical case of too many cooks spoil the broth!

Nevertheless, this opus represents a decent effort to explain C# to anyone new to the .NET framework, as long as you aren’t expecting it to be professional. Admittedly, it hard to write something that pleases both beginners and professionals, but with nine authors, four technical editors, 34 technical reviewers and three proofreaders on the credits roll, it certainly falls short of expectation.