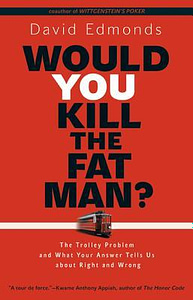 This book will bore you to death if you’re not the least bit interested in moral philosophy, let alone trolleyology.

What makes the Fat Man dilemma so fascinating is that you can come up with an endless permutations of scenarios for various philosophical discussions.

Some of these discussions are, as the author suggests, “enough to make your head spin like a lazy Susan”.

That said, there are many interesting background stories not just regarding the trolley problem, but also the philosophical principles surrounding it, such as the Doctrine of Double Effect, the Extra Push (proving that the road to hell is paved with good intentions), Utilitarianism, etc. It’s a rather short read as long as you don’t get sidetracked (ahem).