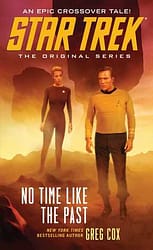 The author wasted no time getting things started. Chapter 1 barely finished and someone has died, with plenty more to follow shortly after that.

No Time Like the Past features a stellar cast – James Kirk, Seven of Nine, Kathryn Janeway (however briefly). Some may find it sacrilegious to mix a character of a spin-off series with the crew of the original series, but what is there not to like about this crossover tale? If Picard had made an appearance too, it would be a grand slam of sorts.

Still, the book is not without issues. Putting aside the time-travel paradoxes, the author failed to catch the erroneous “Kobyashi Maru” reference (which should have been “Kobayashi Maru”) — not once, but twice. 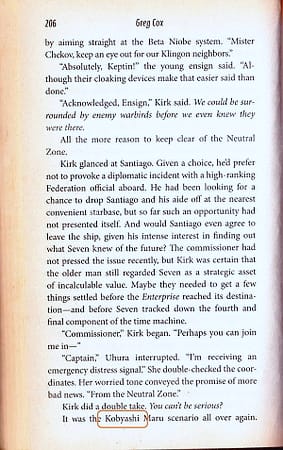 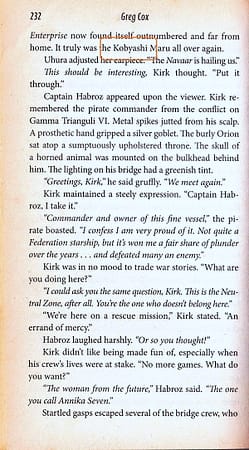 Then there’s the pronoun confusion. One moment Lael the scientist is a “he” (which is correct), next moment Lael is transformed into a “she”, and then subsequently back to “he” again. Somehow, the author also incorrectly used the word “reactive” instead of “reactivate” (see second screenshot on the right), even though he actually used the correct term before (see first screenshot on the left).

These may be tiny errors, but it makes you wonder if the author/editors should have spent more time (ahem!) proofreading the copy.

I also find it irritating that whenever Chekov is mentioned, we are reminded of his “thick Russian accent”.