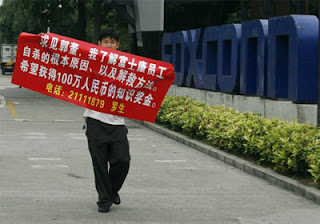 An unidentified man parades outside a Foxconn factory in Longhua, Shenzhen on 27 May with a banner that reads: “I want to meet Terry Gou. I know the reason behind the suicide of Foxconn workers, and the way to solve it. I hope to get one million yuan as a reward.”