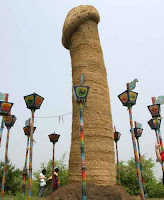 Even tiny peckers are blown out of proportion in the Middle Kingdom. A 30ft penis, reportedly the world’s largest erection, has been built at Longwan Shaman Amusement Park in Changchun city. Called “Sky Pillar”, it is made of 6,500ft of straw wrapped around a steel structure. The giant phallus stands atop the 1,250ft Qinlong Hill and is supposed to “symbolize our ancestors’ pursuit of happiness and prosperity “, according to a spokesperson for the China Folk Culture Association.

Let’s just hope the design is original and its construction is RoHS compliant.