As if getting insulted by Sarah Silverman on MTV Movie Awards wasn’t bad enough, Paris Hilton also had the “pleasure” of being the subject matter of a totally random art competition for children. Called the Paris Hilton Obituary Writing Contest, it solicited 300-word (or less) entries from three age groups – 13 to 14, 15 to 16, and 17 to 18 – with each entry evaluated by a simple rubric that assesses the composition by command of topic, development, organization and creativity. 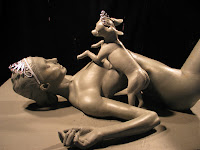 The contest was based on the Paris Hilton Autopsy display by Capla Kesting Fine Art, which featured a nude and autopsied Paris wearing her trademark tiara, has removable innards and is designed to warn teenagers of the hazards of underage drinking. The display also featured Tinkerbell, the heiress’ pet Chihuahua, complete with matching tiara.

Last time I checked, the results were not announced yet (supposed to be June 7).