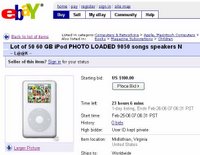 With product refresh cycles getting increasingly shorter, many users have resorted to selling their old iPods with music libraries intact. In fact, some sellers have even make a virtue of the fact, as shown in this screen capture from eBay.

If you’re the type who changes MP3 players like you change mobile phones, remember to purge all the MP3s on the device before you sell it, otherwise you may be in clear violation of copyright law.

“Selling an iPod preloaded with music is no different than selling a DVD onto which you have burned your entire music collection,” the Recording Industry Ass. of America (RIAA) said in a statement. “Either act is a clear violation of U.S. copyright law. The RIAA is monitoring this means of infringement. In short: seller beware.”

The RIAA has already contacted eBay about a seller who was hawking video iPods loaded with 6,000 songs, and it is working with eBay on a system where people who put loaded iPods up for sale will receive a warning.

Pretty soon you won’t be able to sell a used CD on eBay unless the RIAA gets a portion of the sale.

Then again, you can legally sell iPods loaded with MP3s as long as you destroy the original CDs once the iPod is sold (follow link on End-User License Agreement in previous post on February 18). However, no one could expect you to destroy the CDs before the sale is concluded, which means the RIAA cannot possibly prosecute anyone for advertising the sale of a loaded iPod (since at this point, you still retain ownership of the iPod, and the music on it). Furthermore, it would be hard to prove that you didn’t destroy the CDs after you sold the iPod.