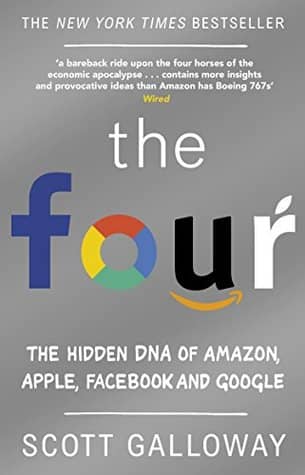 Scott Galloway gives a no-holds-barred lowdown on the Big Four, companies that dominate their respective industries, leading to some undesirable consequences.

For instance, the author called Amazon the destroyer because “the reason Jeff Bezos is advocating a guaranteed income for Americans is he has seen the future of work and, at least in his vision, it doesn’t involve jobs for human beings (referring to the absence of people in an Amazon warehouse).”

He further went on and lamented that “we need business leaders who envision, and enact, a future with more jobs – not billionaires who want the government to fund, with taxes they avoid, social programs for people to sit on their couches and watch Netflix all day.”

His verdict on Apple and Steve Jobs? “The world needs more homes with engaged parents, not a better fucking phone.”

As for Facebook, the author highlights how the social media giant avoided the high costs of producing content (unlike traditional media companies) by getting its users to create the content without compensation (posting on their respective timelines) and then it sells that content to advertisers so they can advertise to the users who made it. That’s, according to the author, “world-class borrowing”.

There’s no love lost between the author and Google as well. Just read the “insider story” about how the author tried to steer the New York Times into the new digital age to avoid being cannibalised by Google. You may want to take it with a pinch of salt, but it does illustrate the unflinching mindset of old media.

Overall, the book is hard-hitting with plenty of food for thought.

Pity about the filler chapter (Chapter 11) at the back of the book: “Parts of this chapter appeared in the March 2018 issue of Esquire.” That’s quite an understatement because those parts seemed substantially like a rehash of earlier chapters.