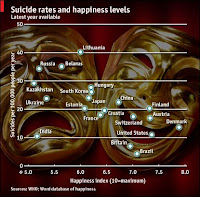 I know a hundred ways to die
I’ve often thought I’d try one:
Lie down beneath a motor truck
Some day when standing by one.

Or throw myself from off a bridge –
Except such things must be
So hard upon the scavengers
And men that clean the sea.

I know some poison I could drink.
I’ve often thought I’d taste it.
But mother bought it for the sink,
And drinking it would waste it.
~ Edna St. Vincent Millay

To die or not to die? That seems to be the question on the minds of Generation S (“Stress” or… read on). According to the World Health Organisation, suicide is now one of the three leading causes of death for people between 15 and 44 years old. The WHO also said that global suicide rates have increased by 60% in the past 45 years.

Rather than track such depressing statistics, there have been suggestions to measure happiness instead. The sad fact is that it is easier to measure suicide rates, whereas to measure “happiness rates” is a problem of philosophical proportions.

Still, the “World Database of Happiness” maintained by Erasmus University in Rotterdam came up with the finding that people in countries with high suicide rates say they are unhappier. Such revelation!