For Paraskevidekatriaphobics (people afflicted with a morbid, irrational fear of Friday the 13th), today could be a day of horror. Not only are we on the second Friday the 13th this year (January 13 was a Friday), it’s also the first time since 1411 that Friday the 13th has occurred twice.

To make matters worse, all the digits in the numeric rotation – whichever way round the date is written, 13.10.2006 or 2006.10.13 – add up to 13, a number regarded as “unlucky” by people in the West who believe in divination by numerology. Furthermore, this “coincidence” last occurred on Friday the 13th, 1520.

The image below shows the months that have a Friday the 13th. 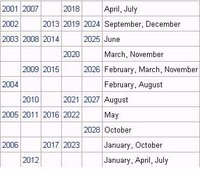 A UK study published in the British Medical Journal in 1993 titled “Is Friday the 13th Bad for Your Health?” compared the ratio of traffic volume to the number of automobile accidents on two different days – Friday the 6th and Friday the 13th – over a period of years. Incredibly, the study found that in the region sampled, while consistently fewer people chose to drive their cars on Friday the 13th, the number of hospital admissions due to vehicular accidents was significantly higher than on “normal” Fridays.

The conclusion? “Friday 13th is unlucky for some. The risk of hospital admission as a result of a transport accident may be increased by as much as 52 percent. Staying at home is recommended.”

However, it’s unwise to take solace in a single scientific study as evidence that your fear may not be so irrational after all. Like they always say, some of these may be self-fulfilling prophecies.

But I suppose all this is water under the bridge now, considering I’m only hours from crossing over to the 14th and nothing bad has happened to me – yet.