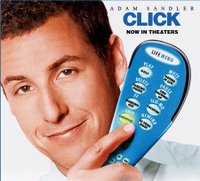 Went to watch Click yesterday evening at Greenbelt 3. This offbeat comedy about Michael (Adam Sandler) who was “gifted” a magical “universal” remote that can fast-forward and rewind his life touched on issues that have real emotional currency for men and women in the modern society: how to allot time to the things that truly matter in your life and be present as a parent.

Perhaps the choice to Michael isn’t that easy, if we consider his despairing outburst to his wife (played by the ethereally beautiful Kate Beckinsale, who looks like Nicole Kidman in her younger days): “Every choice I make, everything I do, I disappoint somebody.”

Maybe. But it reminded me of a story I once read…

A man came home from work late again, tired and irritated, to find his five-year-old son waiting for him at the door. “Daddy, may I ask you a question?”
“Yeah, sure, what is it?” replied the man.
“Daddy, how much money do you make an hour?”
“That’s none of your business. What makes you ask such a thing?” the man said angrily.
“I just want to know. Please tell me, how much do you make an hour?” pleaded the little boy.
“If you must know, I make $20 an hour.”
“Oh,” the little boy replied, head bowed. Looking up, he said, “Daddy, may I borrow $10 please?”
The father was furious. “If the only reason you wanted to know how much money I make is just so you can borrow some to buy a silly toy or some other nonsense, then you march yourself straight to your room and go to bed. Think about why you’re being so selfish. I work long, hard hours everyday and don’t have time for such childish games.”
The little boy quietly went to his room and shut the door.
The man sat down and started to get even madder about the little boy’s questioning. How dare he ask such questions only to get some money! After an hour or so, the man had calmed down, and started to think he may have been a little hard on his son. Maybe there was something he really needed to buy with that $10 and he really didn’t ask for money very often. The man went to the door of the little boy’s room and opened the door. “Are you asleep son?” he asked.
“No daddy, I’m awake,” replied the boy.
“I’ve been thinking, maybe I was too hard on you earlier,” said the man. “It’s been a long day and I took my aggravation out on you. Here’s that $10 you asked for.”
The little boy sat straight up, beaming. “Oh, thank you daddy,” he yelled. Then, reaching under his pillow, he pulled out some more crumpled up bills.
The man, seeing that the boy already had money, started to get angry again. The little boy slowly counted out his money, then looked up at the man.
“Why did you want more money if you already had some?” the father grumbled.
“Because I didn’t have enough, but now I do,” the little boy replied. “Daddy, I have $20 now. Can I buy an hour of your time?”

So, who should you bring along to watch this movie? Well…

4 thoughts on “What if you had a remote that actually controlled your universe?”